Risen is a short film made by my friend Gregory Kurczynski. I’m putting “my friend” right up front, because my wife Lynne Hansen is also in the movie as a zombie rights advocate (and I may even have a secret cameo) so I don’t want you to think I’m trying to be all sneaky and stuff. But rest assured that if I was not legitimately enthused about Risen, I would come right out and say…….well, actually I would probably go all passive aggressive and keep making excuses and just not write about it here. But I am writing about it here. ‘Cuz it rocks.

First off, as soon as you read “zombie rights advocate,” you got the wrong impression of the movie’s tone. This is most definitely not a horror/comedy. Sure, there are some moments of humor, but this thing goes daaaaaark relatively quickly. The setup: Henry (Al Mauro) and Jenn (Jennifer Ward) are flirting in a bar, while a TV newscast discusses the fact that the dead have risen and are consuming people. It’s pretty clear that either Henry or Jenn is a mentally disturbed individual whose plan for the evening involves torture and/or murder, but we’re not sure which one, and so much of the fun of the first few minutes of Risen involves playing a “Who’s the Psycho?” guessing game. (The trailer gives it away, but I won’t here.)

Once the psycho is revealed, I can say that the movie does not involve hordes of zombies coming after anybody, although of course the living dead are a key element.

I thoroughly enjoyed the entire movie, although it had three truly standout visual moments. There’s a quick moment of violence that carries great impact, proving that what you don’t see can be more wince-inducing than what you do. And, later, there’s a moment of good old-fashioned gore–nothing we haven’t seen before, but it’s extremely well-done and should blow the roof off of any film festivals where this plays. And then there’s a moment where harm comes to a television set in a way that I have never seen before and will almost certainly never see again.

Even a film that’s only 23 minutes involves lots of blood, sweat, tears, sleepless nights, stomach cramps, and the tragedy of having to decline invitations to go do cool stuff on weekends. Risen is a worthy end result of complete mental and physical exhaustion. It’s a very well-made, intense, creepy little film.

Where can you see it? Nowhere yet, but as Halloween film festival season starts to crank into gear, I’d expect it to start showing up at quite a few places. To keep up with all the latest news, add “gkurczynski” as a Facebook friend. 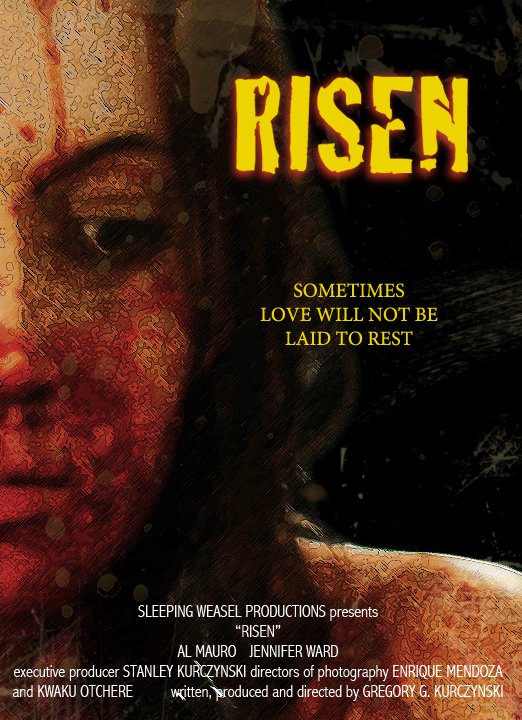