Uh-oh! For Round Three, The Sinister Mr. Corpse is up against Pet Sematary, one of the scariest books ever written, arguably the finest work by a guy who has created some of the most iconic images in the history of the horror genre. Not to mention that I have been a finalist for the Bram Stoker Award twice, and both times I was defeated by Stephen King.

However, the Bram Stoker Award is decided by others, while ZOMBIE WARS!!! is decided by me. So sorry, Mr. King, but victory goes to The Sinister Mr. Corpse!

In Pet Sematary Stephen King kills a cat and a little kid. What kind of morally reprehensible person kills a cat and a kid? Now, you may be saying “But in Pressure didn’t you–?” but I will quickly interrupt. You like cats, right? LOLCats have added merriment to many an otherwise gloomy day. But, oh, that grouchy old Stephen King, he wants your cat to DIE, and then come back as some creepy “I Can Haz Human Flesh?” zombie cat. I’m not saying that if Stephen King were in your house right now he’d step on your cat, but…actually, I take that back. He would. Stephen King would totally step on your poor cat, just to watch its fur darken with blood.

Do you know how many cats die in The Sinister Mr. Corpse? None. Not a single one. Mr. Corpse is an all-human death zone (excluding one fish) and almost everybody who dies is over the age of eighteen. No little kids perish on MY watch.

Also, look at this silly cover: 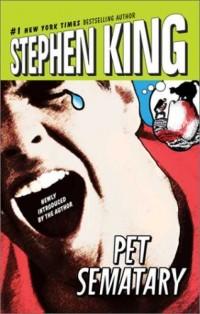 So, yeah, Pet Sematary may be a masterpiece, but it doesn’t have one-tenth of the jolly fun you’ll find in my book.

OFFICIAL RULING: The Sinister Mr. Corpse for the win.