Available now in a Kindle and paperback edition! 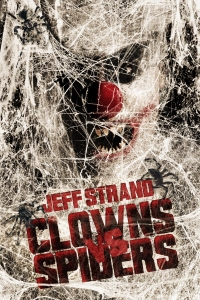 First the blurb. Then some history.

Jaunty the Clown just wants to entertain families with lighthearted slapstick antics, but people think of clowns as terrifying, nightmarish creatures who hide in closets or under beds. When Jaunty, along with his fellow performers Guffaw, Wagon, Reginald The Pleasant Clown, and Bluehead are fired from the circus, they’re told that the world just doesn’t like clowns anymore.

Still, clowns have to eat. And since these clowns don’t eat children, to make ends meet they’re eventually forced to take a job in a popular haunted attraction, the Mountain of Terror. Instead of charming entertainers, they’re now scary clowns. A zombie clown. A demon clown. A creepy doll clown.

But the town is about to discover something more frightening than clowns. Because on opening night, millions of oversized spiders emerge from a cave and begin their deadly invasion…

As somebody primarily known for horror/comedy, you’d better believe I’m into scary clowns! My second short story collection was called Dead Clown Barbecue, a clown plays a key role in Blister, I wrote the point-of-view scenes of Benny the Clown in Draculas, and Stinky the Clown wreaks havoc in The Greatest Zombie Movie Ever. But I’d never written a full-on clown-themed novel.

I’d read an article about real-life clowns who were upset about the whole “scary clown” thing, which was messing with their livelihood. This was at a time when there was a whole epidemic of spooky clown sightings. I did a joke about this when I emceed the Bram Stoker Awards (punchline: “Oh no, we’ve angered the clowns!”) but I did think about the idea that these poor bastards who just wanted to bring joy to children were perceived as terrifying creatures.

And I came up with an idea for a novel where the clowns would be the good guys! Clowns Vs. Kaiju. I’d get to write a clown novel and a kaiju novel (also on my bucket list) at the same time! Pure brilliance!

I told a couple of friends about it. They were underwhelmed. “How do clowns battle a kaiju?” I’d work it out! They’d see! Clowns Vs. Kaiju, baby!

I hadn’t decided what variety of giant creature these clowns would be fighting. And as I brainstormed ideas, it did occur to me that I wasn’t overloaded with thoughts about how a small group of clowns would go up against a city-destroying monster for an entire novel.

Finally I thought, “A giant spider would be cool.” Then I thought, “Why does it have to be one giant spider? Why not lots of much smaller but still way-bigger-than-average spiders? That’ll work way better!”

And so I began the tale of the clowns who were fired from their job at the circus because people don’t like clowns anymore, and how they were forced to take a job as scary clowns in a haunted house just to make ends meet, and how opening night of the haunted house happened to correspond with an invasion of giant spiders in the small town.

To lock down the tone of the book, I decided that the clown stuff could be silly (they are, after all, clowns), but that the spiders were to always be played straight. I allowed some silliness with the non-clown characters, such as Rose the Librarian, who appears in exactly one chapter but has inspired several readers to ask for her to get her own novel. But, again, I wanted the spiders to be as creepy crawly as I could possibly make them. I wanted the book to be filled with moments where you’re delightfully amused and then suddenly shocked by something genuinely horrifying.

Then I had second thoughts about the title. Maybe I should just call it Clowns & Spiders. I was trying to write a legitimately good book here. Not Pulitzer Prize-winning literature, but also not a cheesy “bad on purpose” sort of thing. I didn’t want readers to think it was the literary equivalent of a SyFy Channel creature feature.

I was talked out of changing the title, and the book was published September 2019. It’s December 2019 as I write this, and I can report that the book sold….fine. Sales were perfectly okay. Certainly below my expectations for a book about clowns trying to survive in a town overrun by giant frickin’ spiders! I can usually gauge a book’s initial success by the social media excitement (which is how I correctly guessed that Bang Up was going to tank) but this one didn’t really live up to what seemed to be pretty high anticipation.

A common theme started to pop up in the reviews: People were surprised that it was good! I think that readers were amused by the concept and they loved the cover (one of my favorites by Lynne Hansen) but they didn’t think that something called Clowns Vs. Spiders could actually be a well-told story with compelling characters and correct grammar. “I’ll click the like button on the Facebook post, but I’m not actually going to buy that thing!”

So we’ll see. The book is still young.