Have you always wanted to read the Andrew Mayhem series, but you were turned off by the fact that you had to buy FOUR separate books? That’s for squares!

Well, now you can get all of Andrew Mayhem novels in one convenient e-book for the low, low price of $7.99! That’s like getting one book and two-thirds of another one for free! If it were in print, Amazon says it would be 807 pages! Jeepers!

Yes, it includes Graverobbers Wanted (No Experience Necessary), and Single White Psychopath Seeks Same, and Casket For Sale (Only Used Once), and, holy crap, even Lost Homicidal Maniac (Answers to “Shirley”)!

And it also includes a foreword by the big huggable teddy bear James A. Moore! That’s right, if you’re a James A. Moore collector, there is a HUGE gap in your collection without this. 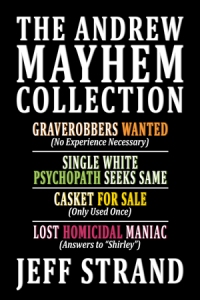 Over at Snakebite Horror, there’s a review of Splatterpunk #2 by Nathan Robinson that says my story “Fair Trade” was “instantly my favourite read of the year, accomplishing more tension in three pages than some authors do in entire novels.” You hear that, some authors? Suck it!!!

Much more important than the sweet comment about “Fair Trade” is the interview with Splatterpunk head honcho Jack Bantry. If you miss the glory days of ‘zines, check out the interview here:

Be Kind To Our Six-Legged Friends

So yesterday I got this free Kindle book about a couple of ferocious dogs who terrorize people in a cabin. I haven’t read it yet, but I did get a kick out of the author’s foreword, which talks about the impact of JAWS on people’s opinion of sharks, and expresses concern that people might read his book and then mistreat dogs. The foreword is basically a reminder that the book is just fiction. Do NOT go out and kick a dog because you’ve been so deeply affected by this novel.

Oh, sure, some of you might get a chuckle from the author having such a high opinion of his book’s ability to traumatize readers. Me? I’m thinking “Oh no! What if Mandibles has caused readers to kick down ant hills?” Mandibles came out almost ten years ago. How many ants have lost their lives as a result of the power of my storytelling?

Yes, ants suck. Especially fire ants. But that does NOT mean that it’s okay to go around kicking down their homes, just because my book gave you the heebie-jeebies. Nor is it acceptable to do the whole “magnifying glass in the sunlight” trick, or to pour gasoline down there, or any of those things. Mandibles is just a book. I know it feels real, and that it causes you to swat imaginary ants off your legs, but please, don’t go on wild insane ant-murdering sprees. That’s how people become serial killers.

Okay, look, if you’re outside and an ant crawls on your arm, it’s okay to squish it. I’m not saying that ants are a protected species. All I’m asking you to do is to resist the temptation to read Mandibles and then seek bloody vengeance against their kind. That’s all.

Are we cool? Good.

No, seriously…what did you think I was going to say?

I mean, can’t I just post about wanting to take a nap without people making it into something filthy? I find it a bit offensive you thought, if only for a second, that I was going to use my blog to share inappropriate details. I would never do that. That’s not what this blog is about. Do you really think so little of me?

I have spent years posting nothing but classy things on this blog, but for what purpose? As soon as I use the frickin’ word “long” I’m getting accused of turning this place into a festival of smut. I mean, if you want to go read your Fifty Shades of Grey, that’s fine, have fun, more power to you, but if you can’t keep your brain from corrupting a perfectly innocent little blog post about how I’m kind of sleepy, we have problems.

I guess now I have to watch every word that I post so that you mud-minded pervos don’t get the wrong idea. I hope that each and every one of you feel the weight of shame upon your shoulders like forty-pound sandbags. Disgraceful. Simply disgraceful.

And what about the people who skim everything on the internet and possibly quit reading before I clarified the subject matter I was discussing? Now they think that I post this kind of stuff with no consideration for who might be in the audience. Great. This day just keeps getting worse and worse.

I’m going to end this post with a frowny face. Hopefully you’ll be considerate enough to read through to the end and not just instantly assume that I’m going to post a colon. 😦

(UPDATE: I didn’t realize that WordPress was going to turn my frowny face into an actual frowny face. The colon reference doesn’t work as well in that context. Oh well.)

I’m all in favor of free discourse on my website, but sometimes people leave comments that are so offensive that my eyeballs literally glow red with rage. (Or maybe they don’t. I can’t see my own eyeballs and I don’t rush to a mirror when it happens.) Yesterday I posted that I would be a) eating hot dogs, and b) drinking peach Snapple, a perfectly delightful thing to share that received the following comment from a beast named Muriel:

“While, as you know, I usually worship the ground you walk on, I can’t condone this. Hot Dogs are bad, seriously bad, and peach snapple is just unconscionable. How could you?

I’m flabbergasted by the notion that someone whose writing style I enjoy could have a taste in foods that differs significantly from my own, and I will have to think about how this influences my opinion of your literary talent.”

Okay, so Muriel doesn’t like hot dogs. Fair enough. Delicious as they might be, hot dogs aren’t exactly made from the best parts of the raccoon, and I can understand his hesitation to gobble them down. But to call peach Snapple “unconscionable” crosses the line.

To be fair, maybe Muriel doesn’t like peach flavor. Maybe he loves lemon or raspberry Snapple…but I don’t think so. I think he was dissing ALL of Snapple, a universally beloved beverage made from the best stuff on earth.

I will not tolerate those who disrespect Snapple on my website. This is a drink that brings nothing but joy to the world. Smiling faces and happy tummies. I’m going to grant Muriel the benefit of the doubt and assume that maybe a neighborhood kid hit him in the head with a bottle of Snapple when he was a wee lad, causing his irrational hatred of the fluid, but really, the only way I will ever truly forgive him is if he posts a picture of himself enjoying a cool refreshing Snapple.

Otherwise, we have nothing more to say to each other.

(Okay, I’m just kidding. I’m going to eat a reasonable number of hot dogs. But they’re going to be goooooooooood.)

GUY BEHIND ME BEFORE MOVIE STARTED: This is a scary zombie movie, right?

GIRL WITH HIM: No, it’s a love story.

GUY: Are you KIDDING me?!? Why didn’t we go see ZERO DARK THIRTY?!?

It’s a fun little movie. Lots of small laughs throughout, and the zombie love story is actually kind of charming. You’d think that the zombie/human love story would be the hardest part to get right; oddly enough, the film does that well but botches almost everything else.

The zombie behavior (even within the context of a story where the zombies “get better”) is wildly inconsistent. They can’t make up their mind if these are slow zombies or fast zombies, how much they recall from their previous lives, if they detect humans by the way they smell, or how much physical strength they have. Since it’s based on a book (which I haven’t read) I would’ve thought they’d have worked this stuff out.

You can feel the studio executives hanging out on set saying “Remember, our audience is 14-year-old girls!” The guy who plays the main zombie does a great job, but–one surprising early moment aside–the filmmakers hedge their bets and make sure he’s never TOO much like a zombie. We don’t want the audience to think he’s less than hawt. His best zombie friend (the most obnoxious guy from HOT TUB TIME MACHINE) is one of the least zombie-esque zombies ever captured on film. Whispering your lines does not make you a zombie.

The central conflict isn’t that big of a conflict, the “skeletons” (zombies who have regressed to the point of no return) are completely non-threatening, and despite the wit and charm, the script feels like a first draft.

So…it’s a deeply flawed movie that I enjoyed. Because the movie is so blatantly catering to the TWILIGHT crowd (to the point of casting actors who look like Edward and Bella) I would guess that most horror fans will hate it, but it’s worth checking out at matinee prices.

Round #1 of edits on my next Young Adult novel, I Have A Bad Feeling About This, are complete. I had to cut a fake blurb from JK Rowling and a really gross part about hot dogs. If I’m ever in England and I see JK just hanging out somewhere, and she’s not having dinner with her family or doing anything where it would be rude to come up and talk to her, I’ll read her the blurb and ask if she would have sued me. I think she will chuckle with her charming accent and say “Why, no, love, of course not; here, have a biscuit,” but I don’t know that for sure, so I accepted my editor’s decision to cut it with only moderate weeping.

So I’m watching this documentary on YouTube called THE SHINING CODE, which presents theories about how Stanley Kubrick filled THE SHINING with hidden messages confessing that he faked the Apollo 11 moon landing.

Some of the theories presented here are rather clever. Some of them are pushing it. And some are like a desperate college professor trying to convince his students that a poem is filled with symbolism. (During a shot of the massacred twins, there are three lights in the background. Those lights represent the three astronauts who died in Apollo 1!!!)

None of it convinces me that Kubrick or anybody faked the moon landing…but my dad works for NASA, so I could be in on the whole thing…

(Also, Kubrick coded hidden messages into EYES WIDE SHUT, confessing that he was kind of a perv.)

Do you long for the glory days of ‘zines?

Well, too freaking bad, because those days are long gone and they’re never coming back! Live in the now! It’s 2013, you old codger!

That said…there are those who are honoring the spirit of the ‘zine by making ‘zines. One of these is a UK publication called Splatterpunk, which has just published its second issue, containing a brand-new story by me called “Fair Trade.” Get one!