Look, it’s a new interview with me! This one, by Brian M. Sammons, appears on the Dark Regions website.

Check it out HERE!

On Facebook, my favorite place outside of the real world, H. Michael Casper asked whatever happened to my vampire novel. Instead of a succinct response on social media, I’ve decided to do a rambling response here.

My young adult novels are contracted before they’re written. So I sold How You Ruined My Life based on a couple of sample chapters and a synopsis, and I had a deadline, and though I wasn’t locked in to every plot detail, I was expected to turn in a book that bore a reasonably strong resemblance to the novel I’d pitched.

The same was true for most of my adult work. Though the digital editions of books like Wolf Hunt 2 and Blister were self-published, the print editions came first, and I was obligated to deliver a book called Wolf Hunt 2 to the publisher or they would send men in dark suits to my place of residence in the middle of the night.

When my dad died, it put me behind on all of my writing, and soon I had deadlines bouncing into other deadlines. My publishers, not being complete monsters, didn’t say, “Sorry, dude, your dead father ain’t our problem,” but it was still a pretty stressful few months as I tried to get caught up.

Finally I did, and I decided that my life would be jollier with fewer deadlines. Now, writing is my only source of income, and I’m not a New York Times bestselling author, so “I want fewer deadlines” is not the same as “I shall tinker at the keyboard at my leisure, sipping sparkling water as I await the moment where the muse doth grace me with its presence.” I still have to crank ’em out. I just decided to go with a “I’ll worry about the print edition after the book is done” model.

Which basically means that I can write whatever I want, within the parameters of knowing that Blister sold extremely well and Kumquat sold poorly, so if I want to keep paying my rent I’d be wise to write more Blisters and fewer Kumquats.

So one fine day I came up with a cool idea for a vampire novel called Miles of Night, one that’s basically a 300-page action sequence. It’s awesome. You’ll love it. I announced that I was working on it, without sharing any plot details beyond “vampire novel.” No projected publication date.

Writing a book where the action never lets up is tough, and I thought I would also enjoy working on a slow burn, dialogue-driven haunted house novel when I needed a break. Sick House was supposed to be a side project. But two things happened:

I decided to promote Sick House to my main project. Since nobody was screaming “Where the hell is Miles of Night, you contract-breaching bastard???” I could do that.

Though there’s still a slow burn element, the pacing in Sick House goes crazy at a certain point, which meant that ultimately it was no “easier” to write than the novel that it replaced as my main project. Irony.

When I finished the book, I weighed a couple of options. Obviously, if I returned to a book in progress, there’d be less left to write. On the other hand, starting fresh with a brand new project at the beginning of the new year had appeal.

I ended up going with a brand-new project. Bring Her Back is psychological horror, written in 1st person. I’m a little over a third of the way done. When that book is finished, I will probably return to Miles of Night.

Or I’ll start something completely new.

Whoa! Golly! Jeez! What a deal! Five thriller authors (me, JA Konrath, Jeff Menapace, Susan May, and Willow Rose) have put their Kindle box sets on sale for 99 cents each!

Get the four-book Andrew Mayhem collection for less than a buck! That’s like 24 1/4 cents each!

This is pure insanity and must be stopped! Don’t click the link. If you do, you’re taking advantage of their momentary lapse of reason. http://bit.ly/18-horror-ebooks

Hey, I was interviewed by Creative Loafing Tampa! No, I don’t live in Tampa anymore, but they knew that when they sent the interview request! Check it out right HERE.

A bonus issue of my newsletter goes out on Saturday, with the new story “The Most Entertaining Man in the Elevator.” Subscribe here: http://eepurl.com/bpv5br

When I was in high school, I was an avid reader of the magazine Deep Red. In one issue, they gave a passionate recommendation for the novel Off Season by Jack Ketchum, supposedly the most intense, brutal horror novel ever written.

I had to read it. So I immediately downloaded a copy to my Kindle, and—

No, wait. This was the late ’80s. No internet. What I did was search used bookstores for a copy. For years. Every time I went into a bookstore, which was often, I tried with no success to find Off Season.

In college, I had a long bus ride home for Christmas, and the Greyhound station had a used bookstore right next to it…and there it was! Off Season! Holy crap! Not only had I found the book that had eluded me all this time, but I found it just as I had a few hours of uninterrupted reading time.

Well, almost. The sun was going to set soon. There were no reading lights on the bus, and I didn’t have a flashlight, so reading Off Season became an exercise in tearing through it as quickly as possible before I couldn’t see the words. I didn’t make it. I tried reading it in sudden bursts as we passed street lamps, but ultimately I had to finish it at home.

The book completely lived up to the Deep Red hype.

I’d eventually locate some of his other books (Hide and Seek, Cover, and the sequel Offspring when it was first published), though Off Season remained my favorite. In 1995, as a completely unpublished author, I went to the World Horror Convention, where Jack Ketchum (real name: Dallas Mayr) was an attendee. I was invited to go to lunch with a few people, but turned them down because Jack Ketchum was on the next panel discussion, and also suggested that they were crazy to miss it. Fools.

On that panel, which I think was “Realism in Horror,” somebody from the audience brought up The Girl Next Door, saying it was the most disturbing book they’d ever read. There was a murmur of agreement from everybody. He talked about the book for a while, including the infamous skeleton cheerleader cover, which basically made this horrific, unbearably dark tale look like a fun YA romp. 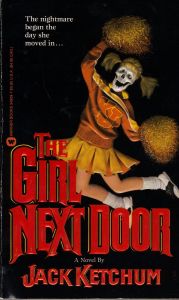 Obviously, I had to read this one, too. John McIlveen sent me a copy, and…yeah. This beautifully written novel doesn’t have the over-the-top gore of Off Season, but it’s a devastating kick to the teeth unlike anything I’d read before or since. This book hurts you. It remains one of the greatest books in the horror—or any—genre, though I probably wouldn’t recommend it as a starting place…

I met him in person in 2005, and he asked to see some of my work, so I sent him the Andrew Mayhem novels. To my surprise, he actually read them, and to my delight, he said he loved them. He would eventually give me a couple of great blurbs (“Jeff Strand is a funny, deeply disturbed individual.” – Jack Ketchum).

Ironically, he was a big fan of my horror/comedy and didn’t think I should be doing the “serious” horror like Pressure. (Though his blurb for Pressure said that Richard Laymon would have loved it. When Jack Ketchum says on the record that Richard Laymon would have loved your book, you freak the hell out. It’s the law.) He even e-mailed our editor at Leisure Books to tell him that he should be publishing my comedic work.

He thought I wussed out in one part of Casket For Sale (Only Used Once), and for that I apologize.

Sometimes people ask when you feel you’ve truly made it, and the answer is “I don’t. I mean, look at me. Duh.” That said, I was at a convention not too long ago, and I was walking down the hallway, and he was walking in the opposite direction. “Hey, Jeff.” “Hey, Dallas.” We passed each other and continued on our way. And a moment later I thought: Oh my God! I can casually greet Jack Freakin’ Ketchum in the hallway and continue on like it’s no big deal!

His book Stranglehold is one of his tamer offerings but has an ending that packs a punch to the gut that rivals The Girl Next Door. Which is pretty much how I felt when I saw the news on Facebook that he’d died. He’s not my first literary hero to die. He’s not my first friend to die. But I think he was the first to be both.

Most authors would love to have one of their novels become an inarguable and iconic genre classic. Jack Ketchum has two of them. RIP.

I saw this guy accidentally drive away from the pump with the fuel nozzle still in his car. The hose just popped right off, like there was a safety feature for this kind of thing. No spraying gas. No explosion. Very disappointing.

In better news, by the end of the day I should be one-third done with Bring Her Back.

This is Sue. Sue loves books.

In fact, Sue just read a book that she really enjoyed.

Because Sue read the book through legal means, she knows that she doesn’t owe the author a damn thing.

SUE: My conscience is clear!

Sue doesn’t care about things like “Amazon algorithms,” so she doesn’t know that when she leaves a review she’s doing her part to boost the visibility of this spoooooky novel.

It’s true, Sue! Your reviews are a crucial component of the success of a book like SICK HOUSE. One review can’t do it alone, but when lots of people write them, why, the author can focus on writing another entertaining novel without being distracted as much by the looming specter of financial ruin.

SUE: Wow. I didn’t know that I could play such an important role. Should I also write reviews of books I haven’t read?

No, no, no. People can see right through that nonsense. We’re not trying to game the system here.

BOB: I thought SICK HOUSE was garbage. Should I review it as well?

SUE: Well, I’m on my way to http://mybook.to/SickHouse to leave my review right now! And then I’ll review enjoyable books by other authors as well! I never knew it meant so much!

Yesterday I sent out the January issue of my newsletter. It’s got information about Sick House, of course. As always, it includes a brand-new, exclusive short story. This time it’s “A Real Haunting.”

You can read the newsletter online by clicking HERE. If you want the convenience of having it sent to your e-mail, the upper left corner of the online version has a “Subscribe” button.