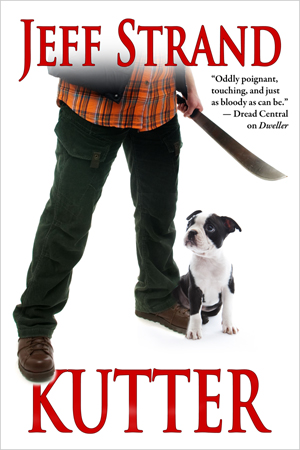 Kutter is the tale of a sadistic serial killer who finds a Boston Terrier and takes it home…and his newfound love for this adorable dog may just make him into a better person!

For me, the books on the page always fall short of the books in my head. I’m extremely proud of Dweller, but it’s not as good as the book I wanted to write. Kutter is the lone exception. Well, maybe it’s not even an exception. I achieved about 95% of what I wanted to accomplish with this novella, which for me is pretty damn good. It’s one of my personal favorites of my own work.

I set Kutter up as a writing challenge. In my novella Disposal, the narrator is an absolute scumbag. Frank is reprehensible, unredeemable, and happy to be that way. It was a lot of fun to write an entire story from his point of view, and plenty of readers commented on how Frank was strangely likable, despite being a complete prick. He’s entertaining. He’s funny. He’s shameless. You wouldn’t want him to move in with you, but he’s charismatic. Similarly, Darren Rust, the villain of my novel Pressure, is a horrible, horrible human being, but it’s easy to see why he and Alex Fletcher become friends. He’s a nice guy, when he’s not using his knife…

With Kutter, I wanted to make things much more difficult. Honestly, it’s not that hard to make a serial killer into a likable fictional character. But what if he was inarticulate, uncharismatic, and just flat-out pathetic? Charlie Stanlon isn’t just the kind of guy who locks women in his basement and tortures them to death–he’s the sniveling weasel at work who goes straight to the boss when you make a mistake. He’s not a villain you love to hate; he’s a mopey creep with nothing much to like about him. He’s the opposite of a Hannibal Lecter.

The challenge? Make that character as repellent as I could, and then dig him out of the hole, courtesy of a Boston Terrier named Kutter. Could I actually make the reader root for a happy ending???

I couldn’t dig into my usual bag of tools. Charlie can’t speak in witty repartee or one-liners. He doesn’t see the world in clever turns of phrase. The book is written in third person, but it’s entirely from Charlie’s point-of-view, so the use of actual “jokes” was inappropriate. In many ways, Kutter is the opposite of my standard approach, which is to take an unfunny premise and infuse it with wacky humor. This book takes the silly “serial killer gets a doggie” premise and treats it with bleak realism.

Honestly, I think it worked.

I’m obviously not going to spoil the ending here, but the final turning point in the story is quieter than one might expect from a Jeff Strand book. It’s about a decision, not an action sequence. It’s not a universally beloved conclusion, but this was always the way I’d planned for the book to end. I think it’s perfect. And, yes, I’m aware that this makes me sound like a crazed egomaniac, but I assure you, that’s the only time you’ll hear me describe one of my endings that way.

Kutter is by design the least funny of all of my books, so of course the first publication, by the short-lived Cargo Cult Press (not short-lived because of their association with me, hopefully), had cartoon character artwork: 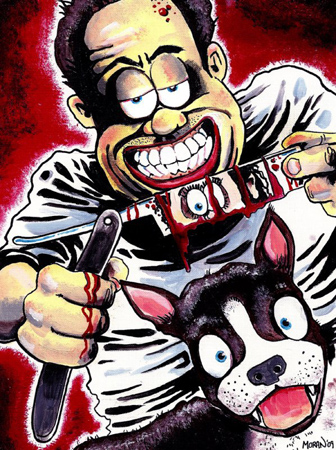 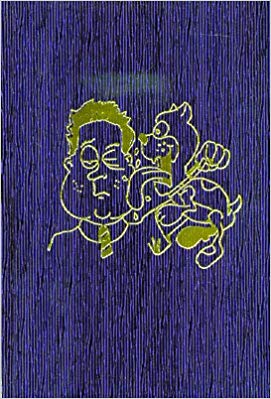 The interior artwork was set up like comic strips. Well done for sure…but not exactly the tone I was going for.

Later, Michael McBride and I would combine his novella Remains with Kutter and publish it as The Mad & The Macabre.

The books didn’t really fit together besides a very loose “animal” theme, and it was really Two Novellas By Jeff & Mike Put Together Because They’re Buddies. After the contract with Dark Regions Press expired we published them individually. And then, a few years later, I included Kutter in Five Novellas.

I’m not planning to use these website essays to heap praise upon my own work (see: How to Rescue a Dead Princess), but screw it: I really like this book.