I went to Duluth, Minnesota to visit family for Thanksgiving. If I were a professional turkey-eater, it would have been an extremely productive few days, but as an author, my professional accomplishments were non-existent.

I write a lot of short stories, but I hadn’t submitted any of them through the slush pile since Blood Lite in 2007. If I write a short story, it’s either for my newsletter, to add unpublished stories to a collection, or because an editor said “Hey, will you write something for this project?” However, a friend brought an open submission call to my attention for a project that was looking for exactly the kind of stuff I write, and so today I sent off “Captain Pistachio’s Charming Rampage.” Will it get accepted? Will I get a form letter saying that while they read my submission with interest it doesn’t suit their present needs? We’ll find out…

An item that’s been on my To-Do list for quite a while is “Archive YahooGroups Newsletter.” Back in July 2000, a couple of months after my first novel Graverobbers Wanted (No Experience Necessary) was published, I started a newsletter that went out 208 times. Because I don’t follow the workings of YahooGroups at all anymore, I figured I wouldn’t know until it was too late if they shut the place down, so at some point I wanted to copy everything into a Word document. “At some point” became today.

It ended up being 100,000 words’ worth of material. My favorite part (based on the skimming I was doing while cutting and pasting) is how it transitions from frequent apologies for sending a newsletter so soon after the last one, to apologies for how long it’s been since the last one. (For the first few years after I started it, it was my primary way of communicating with readers. Once I started a blog, the newsletter became less frequent. When I got into social media, it became WAY less frequent.)

I also liked seeing an early example of sharing negative comments: “These aren’t the kinds of books I would download even if free, and certainly I would not read them.
After all, the mind is much like any programmable device, and the time worn
adage ‘garbage in, garbage out’ fully applies.”

Ferocious got set aside for a couple days to focus on a short story for the anthology And Hell Followed. This story was a rarity for me in that I went over the minimum length (3000 words) and even the preferred length (4000 words), finishing at a little over 4500 words. The editor bought me a barbecue dinner at KillerCon this past summer, so it was extremely important that I meet the deadline, lest he send his goons to get the meal back.

Cold Dead Hands had a very strong launch. If it were a novel, I’d be setting off fireworks to celebrate. Unfortunately, it’s a 99-cent novella. I usually get 70% royalties when somebody buys a Kindle edition of my books, but that drops to 35% when a title is priced under $2.99. So Cold Dead Hands has to sell six times as many copies as something like Bang Up to generate the same amount of cold hard cash. (Not that it’s difficult to sell six times as many copies as Bang Up. Maybe Sick House is a better example.) 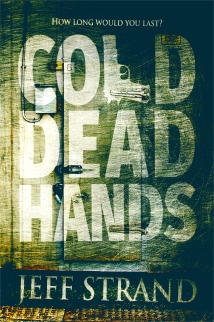 Yes, my novella Cold Dead Hands is available now in a Kindle edition! A vicious attack on a grocery store has turned into a hostage situation. But things are much worse for the ten people hiding in the walk-in freezer…

Here’s the official cover for Cold Dead Hands (by Lynne Hansen). Expect the Kindle edition of the book this week!

I’ve been a slacker with the updates, and I’d offer profuse apologies if anybody actually read these.

Anyway, I’m 25,000 words into Ferocious, but I’ve decided that the scope needs to be expanded, which means that it’s going to be one of my longer books.

I turned in my novella Cold Dead Hands nearly three years ago. Cemetery Dance has given me permission to publish the e-book edition ahead of their hardcover edition, so you can probably expect it…next week!!! Whoa!!! New book already!!!

I thought I was going to get to share some cool news, but it turns out that I’m not allowed to be a squealer yet. In fact, I may be gagged for quite a while. Meanwhile, I’ve got other similarly cool news, and I can’t talk about that, either. Let’s just say that there’s stuff happening behind the scenes. Cool stuff.

We celebrated Halloween with…sushi. Conveyer belt sushi, where the selections travel around the restaurant and you grab small plates as something catches your eye. You can also order from the digital menu and a second conveyer belt will transport it right to your table. We had a place like this in Tampa, but there was no variety on the belt and, it seemed, little turnover. (You could order off the menu and have a server bring it to you, primitive-style, but that sort of defeated the purpose.) The Atlanta one has a large variety of stuff traveling on the conveyer belt and the sushi is quite good.

Halloween continued November 1st with the launch party for the Atlanta branch of the Horror Writers Association. We’ve had a few monthly meetings, but this was an event designed to attract potential new members. I was on a panel about Self Publishing vs. Traditional Publishing, though as a hybrid author I don’t have an obnoxious stance for either side.

Today I wrote my story for the next newsletter, “Corky & Sporky.” I’m proud to say that it is one of the dumbest things you will ever read.