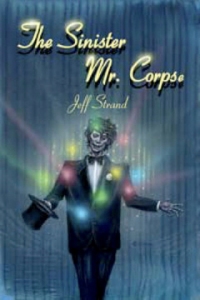 Sometimes they rise from the grave, hungering for human flesh…

Sometimes the zombie plague is transmitted by a horrific virus…

…and sometimes, they’re resurrected in front of millions of viewers as part of a live primetime television special.

This is the story of Stanley Dabernath, zombie. A regular guy who dies, is brought back to life as a ghastly walking cadaver, and becomes the international sensation hailed by the press as The Amazing Mr. Corpse. Fame! Wealth! Groupies! Despite his ghoulish appearance, Stanley finds himself living the dream.

But in many ways, it’s harder to be a celebrity than a zombie. The suits behind Project Second Chance want to tell him how to behave in public. It’s difficult to enjoy a simple restaurant meal in peace. There’s constant pressure coming at him from all sides–not to mention that many people consider him a vile blasphemy that should be erased from existence.

And does Project Second Chance have Stanley’s best interests in mind, or is the real reason behind his reanimation 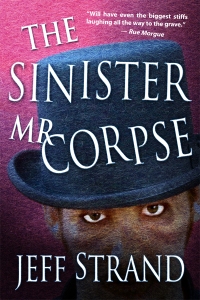 “With loads of relentless action and characters that make reading seem more like eavesdropping, The Sinister Mr. Corpse will have even the biggest stiffs among us laughing all the way to the grave.”

“Those expecting the typical apocalyptic world full of flesh eating corpses will quickly realize they are in for a different treat altogether. For those familiar with Mr. Strand’s popular Andrew Mayhem novels, take the witty banter, sharp one liners and laugh out loud moments, then turn it up a notch or three.”

13 Responses to “The Sinister Mr. Corpse”