Gave Up The Ghost: The Trailer

Whoa! It’s the trailer for “Gave Up The Ghost!” Check it out!

Tomorrow I’ll be leaping on a plane to Pittsburgh to be an author guest at Seton Hill’s In Your Write Mind workshop. I’ll be delivering the Saturday keynote speech, which may be inspiring or it may be me standing at the podium and weeping for twenty minutes–I haven’t decided.

If you’re a writer, aspiring or multimillionaire, you should go. If not, you should at least go to the mass signing Friday night at 7:00 PM. Click the link above for all the details!

It’s finally here! The world premiere of “Gave Up The Ghost!” If you’re within 4 hours and 53 minutes of Buffalo, New York, you can still make it! Hurry hurry hurry! Check out this article in the Buffalo News for details:

It’s a double cover reveal day, mostly because I thought that I’d already posted the Facial cover but it got saved as a draft. So here’s the cover to Kumquat, by Lynne Hansen!

Hey, kids (okay, this one isn’t for kids), here’s Zach McCain’s cover to my new novella, Facial, which will be out November 18th from DarkFuse!

Greg has just killed the man he hired to kill one of his wife’s many lovers. He’s now got a dead body in his office.

Carlton, Greg’s brother, desperately needs a dead body. It’s kind of related to the lion corpse that he found in his basement.

This is the normal part of the story.

From Jeff Strand, the author of Benjamin’s Parasite, The Sinister Mr. Corpse, and Fangboy, comes a tale that’s weird even by his standards.

Facial. It’s not about what you’re thinking. Well, okay, part of it is…

“Gave Up The Ghost” Premiere

So it suddenly turns out that I WILL be at the “Gave Up The Ghost” premiere this Sunday, June 22nd, in Amherst, New York. The rest of the cast and crew were always going to be there, but as the Florida guy with another commitment, I was going to have to experience it via Facebook posts and tweets.

Not anymore! The 20-minute short will have its world premiere at 5:00 PM at The Screening Room Cinema Cafe (Northtown Plaza Business Center, 3131 Sheridan Drive, Amherst, NY). It will be followed by a Q&A and a cast reading of the screenplay for Gregory Lamberson’s next feature, Killer Rack, written by Paul McGinnis.

For more information, check out the Gave Up The Ghost World Premiere Facebook page.

A Trio Of Countdowns…

Only 6 more days until the premiere of “Gave Up The Ghost” in Amherst, New York!

Only 10 more days until Seton Hill’s In Your Write Mind workshop!

Only 15 more days until my new novel Kumquat is published!

All of this data is accurate when you read it, because I know you read my blog every day.

If you’ve ever thought, “Jeff’s stories are delightful fun, but they’d be way more delightful and fun if they were in French,” your thought has been acknowledged! My story “Eight-Legged Vengeance” is in the anthology Ténèbres 2014 where it now goes by the title “La vengeance à huit pattes.” 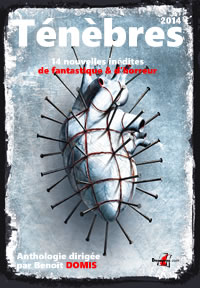 What Madness Is This???

Why, it’s the cover to the German-language edition of Dead Clown Barbecue, to be published by the demented folks at Voodoo Press. It’s my first foreign language book to get the hardcover collector’s edition treatment, so even if you don’t speak German, head on over to the Voodoo Press page to order yourself a copy!

In Development: FANGBOY – The Comic Strip!

As a kid, I really wanted to be a cartoonist. I mean, REALLY wanted to be one. I drew non-stop. I was unbelievably passionate about it. I was so devoted to the idea of being a cartoonist that in the 8th grade one of my teachers brought in a professional to assess my abilities.

Her official evaluation was that 1) I wasn’t very good, and 2) I probably wouldn’t get any better.

At the time, I didn’t care what some crabby lady thought, and my enthusiasm was not impacted one iota. And she was right–I wasn’t very good. “He probably won’t get any better” was, admittedly, a pretty frickin’ horrible thing to say, but I suspect that this woman was told that she’d be gazing upon the astonishing work of a cartooning prodigy, and making a special trip to the school only to see my below-average work just put her in a bad mood.

In the 11th or 12th grade, like 75% of aspiring cartoonists, I wanted to do a Far Side clone. I wrote over 100 gags. I finished drawing exactly zero of them. For some reason, the writing part was a blast, but the drawing had become such a chore that it stopped being fun. I dropped the cartoonist idea, and focused entirely on writing.

Over the years, every once in a while the idea of “I wanna draw a comic strip!” would pop up, but I’m busy writing novels and stuff, so I never really got back into it. My one published cartoon was in the Chase Manhattan computer security awareness newsletter, and it took me FOREVER to draw.

A trio of decades after my art skills were deemed crap, I got a Facebook message from Austin May, who writes and draws the strip Air Force Toons, saying that he was a fan of my books. I messaged him back and told him that doing a comic strip was my dream job. He suggested a collaboration. I put “Come Up With Awesome Comic Strip Idea” on my To-Do list.

Time passed, because I am a slacker.

Then Austin suggested adapting one of my novels. I’d never even considered the idea of doing one of my books as a comic strip (as opposed to a comic book) before, but suddenly Fangboy seemed perfect! Not necessarily easy. We would, after all, be breaking a novel down into a long series of three-panel gags. It wasn’t as if I could just lift moments out of the book verbatim. But…this could work!

Austin sent me some fantastic character sketches, and I wrote scripts for the first six strips. He sent me the first two completed strips, and I realized that this was the key to fulfilling my childhood dream: let somebody else do the art.

Fangboy will be a weekly strip. Right now we’re working to build up a nice big backlog of strips, and there’s no official launch date. Lots of details remain to be worked out. But, hey, here’s a teaser:

Three Generic Questions With Austin May:

Q: How long have you been cartooning?

A: Short answer: Since I could hold a crayon. I’ve been drawing since before I can remember, and my mom still has the scribbles to prove it. As for cartoons and comics, I suppose you could say I got my start in junior high on the school newspaper. I think it was 7th grade – after that there was never a time when I wasn’t making comics and illustrations for a school paper. When I joined the Air Force in 2001, I did a lot of one-off comics making fun of the various jobs I did, and they made their way around via email and message boards, so I started doing more regular, routine strips. Eventually those became my comic strip Air Force Blues in 2007, which led to my weekly strip in Air Force Times, which began in 2009 and is still going strong today.

Q: What’s your process when you create a strip?

A: The process really depends on the strip and the idea behind it. In some cases, like with Fangboy, I already have the script, so I focus only on the artwork. With Air Force ‘Toons, I have to first come up with an idea before starting on the art. A lot of times I’ll scan headlines or Air Force message boards to see what topics are hot at the time and try to do a strip relating to one of those. That’s not always easy, so sometimes I have to just pull from everyday life in the USAF. I have, in the past, just started drawing with no clue what the strip will even be about. Although everything I do these days is digital, I still start with a rough sketch before building the art layer by layer in Photoshop. Even though it’s on a tablet computer, I draw everything by hand. Often, I just go into it with a vague idea and write the dialogue once I have the art done to see what fits. Once I have the words actually typed into the strip, I add the bubbles, adjust the paragraphs to fit and call it good.

Q: What are your favorite comic strips?

A: My favorite comic strip of all time is, like so many others, Calvin and Hobbes. Even though many of Bill Waterson’s jokes went right over my head when I started reading his comics as a child, the artwork was so brilliant I didn’t even care. After that, Bill Amend’s Fox Trot is a very close second. Get Fuzzy is another one I’ll read anytime I see it, and Gary Larson’s Far Side never fails to make me laugh. Online I like to read Penny Arcade – despite not being a gamer – because I love the art.
Stay tuned to this website for more updates on Fangboy: The Comic Strip!