How to Rescue a Dead Princess 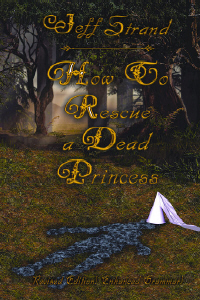 My modest goal here was to write the funniest book of all time. So it had joke-joke-joke-joke-joke pacing from beginning to end. I wanted something funny in every single paragraph. I wanted every sentence of this book to either be a joke or the setup to a joke. And if we speak only of quantity of jokes…well, the book succeeded. There are a lot of frickin’ jokes in here.

So as you may have guessed, this book tries too hard. Even with my young adult comedies, where everything is played for laughs, I don’t try to cram jokes into every single nook and cranny. If the part I’m writing doesn’t have a place for a laugh, I don’t try to force one in there. In How To Rescue a Dead Princess, there’s a “throw everything against the wall and see what sticks” method to the madness, which also leads to stuff like a Jack in the Beanstalk parody that doesn’t really connect to the rest of the book very well. It’s basically just whatever I thought was funny at the moment that I was writing that particular scene.

Actually, the cover above is the second version of this novel, published by Mundania Press and which I called How to Rescue a Dead Princess: The Special Edition. I cut a lot of weak/inappropriate jokes out of the first version, published by Hard Shell Word Factory, and restructured the story a bit to make it look like I cared more about the plot. My criticism of my own work still stands.

I don’t want to get too self-deprecating, though. There’s a lot of really funny stuff in this fantasy spoof, assuming you’re into extremely silly humor. And the story, about a squire assigned to escort a princess on a diplomatic mission who ends up accidentally disintegrating her instead, moves quickly and has lots of conflict. It’s a deeply flawed but entertaining first effort. And Gordon Van Gelder, then an editor at St. Martin’s Press, said he absolutely loved it even if it wasn’t the kind of stuff they published.

I originally called it Pointless Quest. Then I signed with an agent who said, “If it’s pointless, why would people want to read it?” I argued that people who didn’t get that the title was supposed to be funny were not part of my target demographic. He insisted on calling it The Quest. I came up with a list of about a dozen alternate titles, but he wouldn’t be dissuaded from The Quest. After we eventually parted ways, I decided that I liked my alternate title of How Do You Rescue a Dead Princess? but changed it to How to Rescue a Dead Princess.

You can get used copies of the paperback, but there’s currently no Kindle edition available. Every once in a while I think about doing another pass and publishing How to Rescue a Dead Princess: The Ultimate Edition…but it’s an old book, and I’m not gonna get it anywhere close to my current standards. If somebody wants to track down an ancient copy, I’m all for it, but I’m reluctant to offer it as a “new” project and have readers say “WTF is this nonsense???”

Here’s the cover to the original edition:

And here’s the blurb:

From the creative genius who would have brought you Hamlet, The Scarlet Letter, and a less-boring Moby Dick (if he’d been born on time) comes this outrageous comic fantasy.  It’s a tale filled with so much adventure, so much excitement, so much vocabulary, that all who read it will suffer a fit of giddiness that will freak out everyone in their general vicinity.

It’s the saga of Randall, a squire assigned to escort the lovely Princess Janice on a diplomatic journey of utmost importance.  Then she gets killed.  Now Randall must overcome desperate odds and ridiculous dangers in his quest to bring her back to life…before the entire Generic Fantasy Land falls into the evil clutches of The Dark One!

Packed to the bursting point with unrestrained silliness (so be sure to hold it a safe distance from your face when reading), How to Rescue a Dead Princess is the novel all the really cool people are reading this year, an epic fantasy for your family to cherish approximately forever.

And now, here are some vintage reviews. There used to be links, but some quick clicks showed that all but the first one were dead. RIP.

“A delightfully ridiculous spoof…well plotted, imaginative, and just a bit twisted.  How to Rescue a Dead Princess is your ticket to inspired foolishness.”

“Be prepared to laugh harder than you have in a very long time!  This talented author will have you laughing from cover to cover.”

“Very highly recommended.  Jeff Strand has a wonderfully sharp wit…basically, he does everything right.  Go buy the book.  Do it now.”

“I have never laughed so hard over a book as I have with this one.”

“Who cares about fully developed characters and smooth transitions?  This man is a comedic genius!  Jeff Strand is setting a new precedent for writers of comedy.  HOW TO RESCUE A DEAD PRINCESS is pure wonder.”

“Jeff Strand still holds the title of being the sickest author I know!  I dare anyone to read this story and while in a mad or blue mood and remain that way by its end. TOO FUNNY TO IGNORE! Highly recommended!”

“One of those books that has to be read to be believed.  All I can say is:  Jeff Strand should be arrested for writing addictive works–maybe I should write my congressman (if Jeff is incarcerated, he will have more time to write).”

5 Responses to “How to Rescue a Dead Princess”