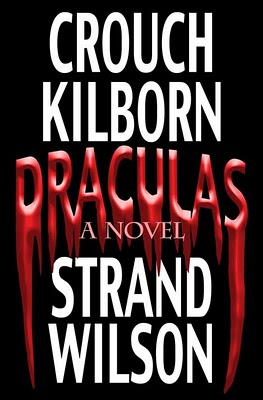 A novel by me, F. Paul Wilson, Jack Kilborn, and Blake Crouch!
The really cheap ($2.99) e-book edition is available through Amazon, where the 80,000 word novel includes an additional 80,000 words’ worth of bonus content. A print edition (which doesn’t include the bonus material) is also available.

A DYING MAN’S GREATEST TREASURE…Mortimer Moorecook, retired Wall Street raider, avid collector, is losing his fight against cancer. With weeks to live, a package arrives at the door of his hillside mansion—an artifact he paid millions for…a hominoid skull with elongated teeth, discovered in a farmer’s field in the Romanian countryside. With Shanna, his beautiful research assistant looking on, he sinks the skull’s razor sharp fangs into his neck, and immediately goes into convulsions.

OPENS THE DOOR TO AN ANCIENT EVIL…

A rural hospital. A slow night in the ER. Until Moorecook arrives strapped to a gurney, where he promptly codes and dies.

WHERE DEATH IS JUST THE BEGINNING.

Four well-known horror authors pool their penchants for scares and thrills, and tackle one of the greatest of all legends, with each writer creating a unique character and following them through a vampire outbreak in a secluded hospital.

The goal was simple: write the most intense novel they possibly could.

A Word of Warning:

Within these pages, you will find no black capes, no satin-lined coffins, no brooding heartthrobs who want to talk about your feelings. Forget sunlight and stakes. Throw out your garlic and your crosses. This is the Anti-TWILIGHT.

NOTE: DRACULAS is a full length novel, 80,000 words long. But this ebook is also brimming with an additional 80,000 words of extras and bonuses:

– a clickable table of contents
– a round-robin interview with Strand, Wilson, Crouch, and Kilborn about writing DRACULAS
– deleted scenes
– two alternate endings
– four excerpts from the authors’ other works
– the short story “Serial” by Crouch and Kilborn
– the short story “Cub Scout Gore Feast” by Kilborn and Strand
– the short story “A Sound of Blunder” by Kilborn and Wilson
– author biographies
– comprehensive clickable bibliographies
– an exclusive, behind-the-scenes look at the writing of DRACULAS, delivered through a collection of over seven hundred emails between the writers as they were brainstorming and writing the book

F. PAUL WILSON is an award-winning, NY Times bestselling novelist whose work spans horror, adventure, medical thrillers, science fiction, young adult, and virtually everything between. He is best known as the author of THE KEEP and creator of the urban mercenary Repairman Jack.JACK KILBORN is a pen name of J.A. Konrath, who has written six Jack Daniels thrillers. The seventh, SHAKEN, will be available this October. Kilborn is the author of AFRAID, ENDURANCE, TRAPPED, and SERIAL UNCUT, (written with Blake Crouch) which has been downloaded more than 250,000 times.

JEFF STRAND is the Bram Stoker Award-nominated author of such novels as PRESSURE, DWELLER, GRAVEROBBERS WANTED (NO EXPERIENCE NECESSARY), BENJAMIN’S PARASITE, and THE SINISTER MR. CORPSE. His secret shame is SUCKERS, co-written with J.A. Konrath.

BLAKE CROUCH is the author of four thrillers, DESERT PLACES, LOCKED DOORS, ABANDON, and SNOWBOUND, all published by St. Martin?s Press. His short fiction has appeared in Ellery Queen, THRILLER 2, and other anthologies.