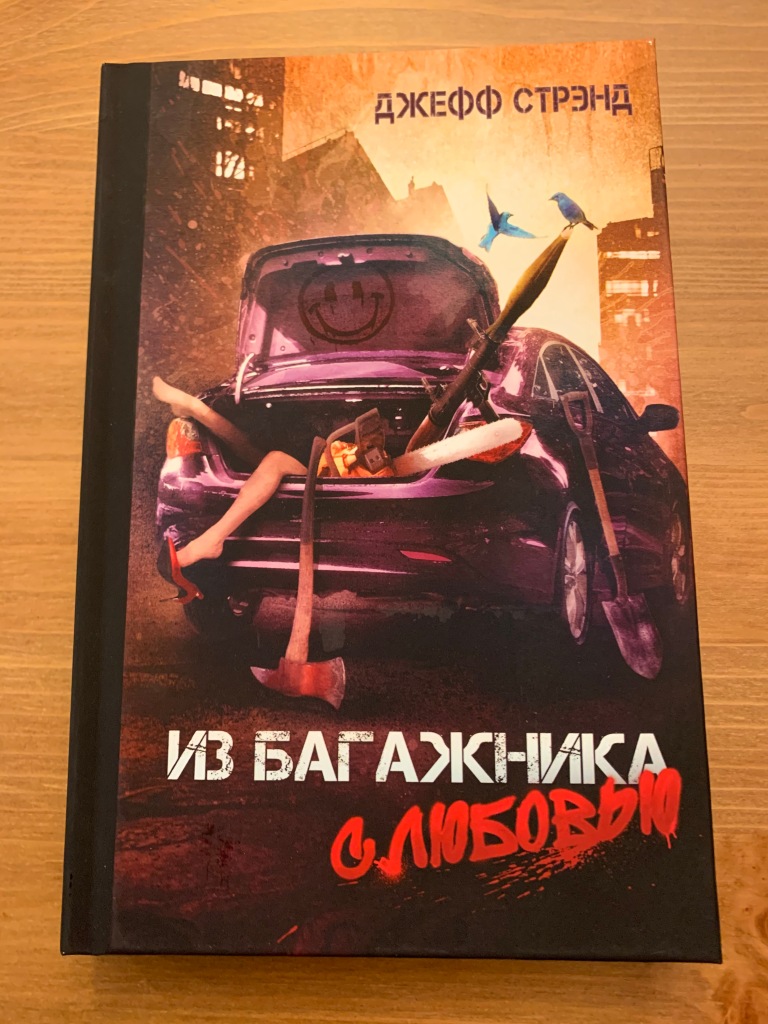 This is one of my hardcover copies of From The Trunk With Love. The publisher swears to me that this title sounds very sinister in Russian, and I’m trusting her. It is, in fact, a Russian-language compilation of Cold Dead Hands, Stalking You Now, and Faint of Heart, published by Poltergeist Press. I think you should buy it even if you can’t read Russian. I mean, imagine the fun looks you’ll get if you pretend to read that book in public!

It’s my first Russian edition. Many of my books are available in German-language editions, but other translations have been elusive. There’s a Japanese edition of Draculas. There’s a Dutch edition of A Bad Day For Voodoo. My story “Eight-Legged Vengeance” was translated into French. And that’s it…so far…

Later today I’m driving up to Birmingham, Alabama for Noir At The Bar, my final author event of 2019. It’s supposed to be a 5-7 minute reading. Coincidentally, every issue of my newsletter has a brand-new flash fiction story, which takes about 5-7 minutes to read out loud. So I have lots of options in the story-selection process. I’m either going with “Fresh Fish” (which I’ve read a couple of times to great reactions) or “Clicking the Heart” (which is untested terrain).

Next week I’m going to Minnesota for Thanksgiving, so you can expect a “Gaaaahhh!!! It’s freezing!!!” tone to future blog posts.

The day has arrived! Yes, the Kindle edition of Wolf Hunt 3 is now available! This book is cray cray bonkers, so I hope you enjoy it.

Get it right HERE. 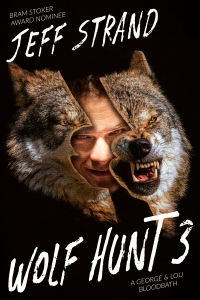 Started two new novels today, both of them supernatural horror.

The first one, which I will call “The Cult Book” for now, is going to an agent when it’s done, which means you won’t see it anytime soon.

The second one, which I will call “The Telekinesis Book” for now, will be my next self-published novel, so you’ll see it way sooner, even though I’m planning to devote 80% of my novel-writing time to The Cult Book until it’s finished, and a scant 20% to the Telekinesis Book. It’s been quite a while since I’ve had two novels going at the same time, but I want to get a head start on the second one, even if it’s just a couple of pages a day, for when I look at my royalties and go “AAAHHH!!! I NEED A NEW BOOK OUT!!!”

I’m also writing the screenplay for a motion picture adaptation of one of my books. Which one could it be??? The filmmakers involved will do an official announcement in December.

And, of course, Wolf Hunt 3 comes out tomorrow!

I did NOT run up to the very last second with Wolf Hunt 3, but nor have I spent the past few weeks in a state of blissful relaxation. Unlike a human editor, where you can beg for mercy, the Amazon countdown is a soulless monster, counting down the seconds without remorse.

Horror DNA just posted an extremely flattering review of Clowns Vs. Spiders, so while you count down the seconds until the return of George & Lou, you can check it out HERE.

With Wolf Hunt 3 done, I’m going to take the next few days off and just binge-watch some…ha ha ha! Just kidding! When I’m in the final stages of writing a novel I fall behind on EVERYTHING, and so the end of a book means it’s time to tackle a frightening To Do list. But I’m having a delicious burrito for dinner tonight, so life is good.

The final version of Wolf Hunt 3 is due to Amazon in 1 day, 11 hours, 29 minutes, and 34 seconds. (Yes, the menacing countdown clock has seconds.) With the deadline approaching so quickly, of course the book has been locked in for the past couple of weeks…is what I believe before waking up screaming in the middle of the night as reality hits.

Standard operating procedure for me. With the next book I’ll vow not to let it happen again, and it will be laughable self-delusion.

Hostile, the short film to be directed by Brett Kelly based on my short story, goes before the cameras on December 15th. That’s Canada in December, so I’m glad it takes place indoors.

Short Flick & Leaders of the Pack

I’m waiting on super-big news, but fortunately I’m too busy to be driven to the brink of madness over it. And I have a couple of other pieces of news:

Filmmaker Brett Kelly is going to direct a short film based on my script “Hostile,” which I turned into a short story that was published in DOA III. He has already begun the process of gathering the necessary props: 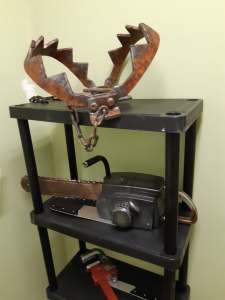 Meanwhile, the anthology Leaders of the Pack is up for pre-order (to be published in January). Authors of werewolf novels wrote short stories featuring characters from their novels. My contribution, “Ivan’s Night Out,” is a Wolf Hunt tale! 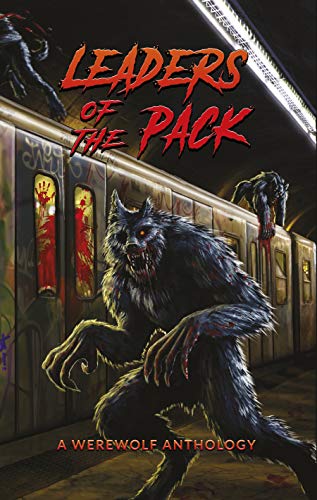 Check it out right HERE.

The final version of Wolf Hunt 3 is due to Amazon by the 15th, so I should probably finish up this blog post and get the hell back to work. You can pre-order that one right HERE.

It’s November, so the weather here in Atlanta has gone from “way too hot” to “way too cold” with very little transitional time. Ugh.

I have various bits of interest in movie adaptations of my work (at least one of which is pants-soilingly amazing) but they’re all in a “You will breathe no word of this to anybody!” level of secrecy right now. Except one! Last night, Buffalo NY filmmaker Mick Thomas officially announced that he’s making a feature film from my novella Disposal. He’s already written the screenplay and plans to have the movie completed in the next twelve months. I believe he’s planning to share frequent updates throughout the process, and I’ll pass ’em along!

(If you want to read the novella before you see the movie, it’s in Gleefully Macabre Tales.)

Will I have more movie news soon? Mayyyyyyybe….

Got an extra Audible credit lying around? The audiobook of My Pretties, narrated by Aida Reluczo, is now available! Get it HERE.