Fun Fact! The hardcover limited edition of A Bad Day For Voodoo has an extra chapter that spoofs the mash-up novel craze: Wuthering Heights (With A Cow In It). It was cut from the paperback/digital edition because, even by the standards of that book, it was too silly.

What if I said you could get the Kindle edition of Wolf Hunt for only 99 cents?

But wait! What if, for that very same 99 cents, you could also get Virgin by F. Paul Wilson?

“Are you kidding me?” you’d say. “Both of those fine novels for less than a buck? That’s crazy!”

And what if we added Haunted House by Jack Kilborn & JA Konrath to the deal?

“You’re a lying piece of crap,” you’d snarl. “That’s, like, a quarter a book. How gullible do you think I am?”

And, hypothetically, what if you also got Speed Dating With The Dead by Scott Nicholson?

“F*** you!” you’d shout, spittle flying from your lips. “A deal that amazing doesn’t exist. I’m going to report you for fraud, you dishonest f***ing jerk. Let’s see how many Kindle box sets you compile from prison!”

And what if there was a sixth novel, The Final Winter, by Iain Rob Wright?

“I’ll kill you for your relentless onslaught of lies!” you’d bellow as your friends held you back. “Mortimer, fetch my shotgun! Let’s show this son of a bitch what happens to scam artists around here!”

Well…it’s all true. You can get the six-novel Ultimate Supernatural Horror Box Set for a mere 99 cents! If I said “Hey, can I touch your ear for 99 cents?” you’d say no, and yet that’s all it costs to get SIX books! That’s only 16.5 cents per book!

This is for a limited time only, so CLICK THIS PARTICULAR LINK immediately. 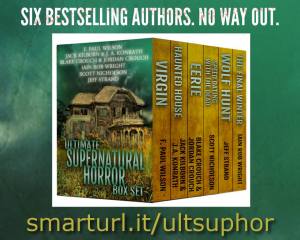 Publishers Weekly on I HAVE A BAD FEELING ABOUT THIS!

Publishers Weekly has reviewed my upcoming young adult novel I Have A Bad Feeling About This, and because I’m posting about it instead of pretending it doesn’t exist, you’ve probably guessed that they liked it!

To read the full review and verify that I’m not just making stuff up, check out the following link:

Another Exciting Guest Blog Rerun From 2012!

Continuing my series where I post guest blogs I did in 2012 to promote A Bad Day For Voodoo. In the days before everybody made fun of Miley Cyrus, they used to make fun of Snooki. This one also has a cutting edge reference to the Mayans.

Q: Are there any mean jokes about Snooki in A Bad Day For Voodoo?

Q: Why not? What’s the point of writing an entire book if you’re not going to include any mean jokes about Snooki?

A: No. I mean, I don’t actually know Snooki.

A: No, no, I know who Snooki is. But I don’t know much about her. I’ve seen pictures, but I’ve never seen her in motion.

Q: Did you know that her baby’s due date is the exact same day that the earth is coming to an end? Well played, Mayans. Well played.

A: Why do people keep posting that on Facebook? Simple math skills and a basic understanding of the human reproductive cycle are all it takes to prove that they’re a couple of months off.

Q: So you DO know everything about Snooki!

A: When people started posting that joke, December was still more than nine months away.

Q: Why don’t you just marry Snooki and raise the baby in your own little “Oh, I’m so smart that I can use a calendar” world.

Q: She’s an author herself. She made way more money from her book than you did.

Q: You should go back and add some mean jokes about Snooki to your book. That’s what people want to read.

A: I think it’s too late now. I don’t think the publisher wants to recall all of the copies so we can add some anti-Snooki jokes.

Q: So what you’re saying is that you’re totally in love with Snooki and want to raise her baby and write books with her. Real nice. Great lesson you’re teaching today’s youth.

A: What if I made fun of her in a blog post promoting A Bad Day For Voodoo? Would that count?

Q: Too little, too late, dude.

A Bad Day For Voodoo vs. The Hunger Games

So I’m writing a bunch of guest blogs for my upcoming novel I Have A Bad Feeling About This (example: “Why Reading I Have A Bad Feeling About This Is Better Than Getting Poked In The Face With A Stick”). I’ll start posting links to those in a few weeks, but just for fun, I’m going to be posting some of the ones I did for A Bad Day For Voodoo in 2012, including this informative Q&A:

Q: Is A Bad Day For Voodoo as good as The Hunger Games?

A: Well, I wouldn’t say that. I guess it’s up to the reader to decide.

Q: Did you really just compare your book to The Hunger Games?

A: No! All I said was that it’s up to the reader to decide.

Q: But apparently you think that A Bad Day For Voodoo is worthy to be in the same sentence as The Hunger Games.

A: Um, no, I’m not the one who put them in the same sentence. You did that,

Q: The Hunger Games is 100% pure awesomeness and I resent you saying that your book reaches those heights. The Hunger Games is kind of violent, though. If they could get rid of the violence, it would be even better. I should write my own version that doesn’t have any kids killing each other. That would be sweet. Is A Bad Day For Voodoo a wholesome tale that contains no violence?

Q: Are you lying?

Q: So you’re basically saying that your book represents everything that’s wrong in today’s society?

A: No, I wasn’t basically saying that. Look, you asked if it was as good as The Hunger Games, and I just said that readers can decide for themselves.

Q: Everybody knows it’s not, though. I mean, duh.

A: Have you even read it?

Q: I skimmed the back cover. Do you have anywhere to be for the next few hours? I could read it right now and tell you what I think.

A: Could I maybe go get some lunch or something and come back?

Q: Well, shut my mouth. A Bad Day For Voodoo is way better than The Hunger Games. In fact, it makes The Hunger Games look like somebody just slobbered on some paper and called it a book! If I had a copy with me, I’d punch it!

Q: I should have said that I’d shoot it with an arrow. That would’ve been a better Hunger Games reference. Lots of arrows are shot in that book.

Q: Okay, so everybody should read The Hunger Games and A Bad Day For Voodoo in whatever order works best for their own personal schedule. Buy them both today!

In what I believe is a first for the blogosphere, I am writing this blog while on fire.

I don’t mean that I’m wearing a pair of gloves and one little pinky has a tiny flame on it or something weak like that. I mean that I am literally writing this blog while engulfed in flames, screaming and running around the room, getting soot all over my iPad screen.

Sure, I could jump into the shower, but then this would just be a blog by somebody who was recently on fire, and that’s not all that impressive. No, even though it hurts pretty darn bad, I am going to remain alight until I finish this blog. That’s how important it is to me that you get cutting-edge content.

It’s possible that some of you don’t believe me. “Hogwash!” you’re shouting. “Nobody in that situation would continue to write a charming blog entry instead of seeking medical attention! Hogwash, I say!”

Why has our world become so cynical? Do you really think that I’m so desperate to attract attention to my upcoming young adult novel that I would lie about writing a blog post while on fire? I’m doing this for you. I downplayed the damage to my iPad earlier so that you wouldn’t feel guilty, but it’s melting all over the place and I’ll probably have to buy a new one.

Some of you may be wondering why I don’t post pictures to prove it. I’ll tell you why: because I’m on fire and don’t really have time right now to take pictures of myself just to address your doubts! C’mon, if somebody said “Hey, I drove my car through a guardrail and now I’m teetering over the edge of a cliff and am seconds away from plummeting six hundred feet onto rocks, explosives, and quicksand!” would you ask them to take a picture to prove it? Of course not. That would be rude. All I ask is for the same consideration.

I know, I know: you think that a blog post written while on fire should have more typos. Well, I do have an editor, who will be translating sentences like:

“In what I believe is a first for the blogosphere…”

Anyway, I’m seeing a lot of visible bone on my arm now, so it’s probably time to wrap this up. Thank you for allowing me to make Internet history!

You may not have even noticed that the digital edition of Gleefully Macabre Tales had disappeared. But it will be back very soon, with a shiny new cover by Lynne Hansen.

Got some great news from Sourcebooks today: I Have A Bad Feeling About This is a Junior Library Guild pick for March 2014!

This means that if you purchase the book and are not satisfied, a licensed representative from the Junior Library Guild will visit your home to personally apologize. Unless it was explained to me incorrectly. It probably was. If you didn’t like the book, you wouldn’t say anything anyway, because you’re a very polite person.

Also, there’s a great review at My Never Ending List, so check it out!

Yes, the clock successfully struck 2014! So I’ll start the new year off with a summary of my current writing projects.

I Have A Bad Feeling About This – Young adult comedy novel. To be published by Sourcebooks on March 1st. Digital advanced reading copies are on NetGalley, if you’re one of those awesome reviewer/blogger types…

Kumquat – Adult comedy novel (with a couple of sad parts). Still in a holding pattern.

Wolf Hunt 2 – New wolf. Same George and Lou. I’m not that far into it, but very bad things are already happening.

Chiggers – Horror novella. I’m not that far into it, but very bad things are already happening.

The Giraffe – Purely a “fun” project. Probably a novella.

Work-For-Hire Story That I Still Can’t Blab About – But it’s gonna be cool.

Pressure: The Screenplay – Maybe I’ll add a unicorn to this draft.